Our best selling spicy cheese! The ghost pepper, also known as the Bhut jolokia, is world famous for its heat, and this Cheddar does not hold back. Cultivated in Northeast India, Guinness World Records certified in 2007 that the ghost pepper was the world’s hottest chili pepper, 400 times hotter than Tabasco sauce!

The ghost pepper was superseded by the scorpion pepper in 2012, but is rated at more than 1 million Scoville heat units.

“Is it really spicy?” If you have to ask then the answer is probably “yes!” But only your mouth knows for sure…

Yancey’s Fancy has been producing artisan cheese in Western New York for over sixty years.

There are no reviews yet.

To ensure the quality and safety of perishable goods, orders are typically shipped Monday–Tuesday, with occasional exceptions for holidays. Orders received after 11:59 AM Eastern on Tuesdays may be held until the first shipping day of the following week. 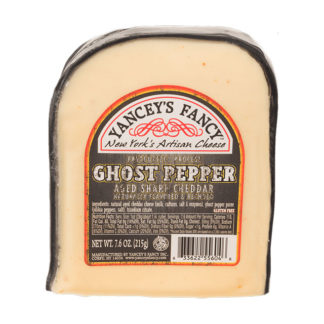